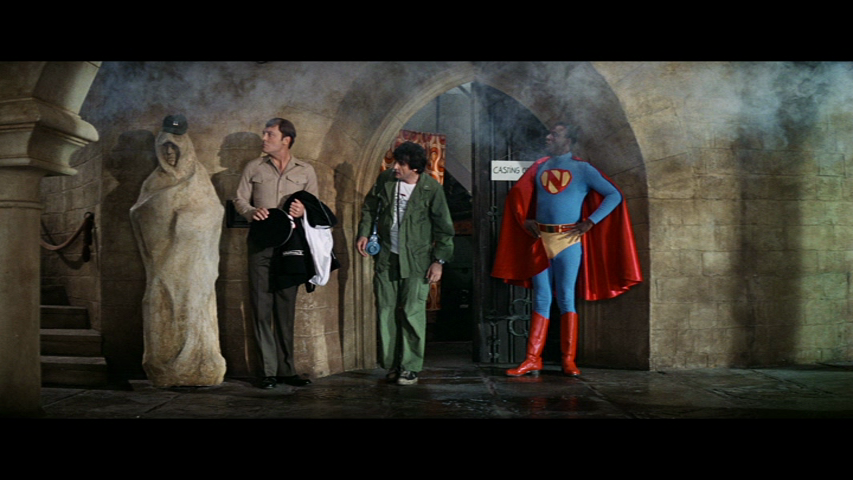 The Ninth Configuration (1980)
Written and directed by William Peter Blatty
Produced by William Peter Blatty, William Paul, Tom Shaw
Starring Stacy Keach, Scott Wilson, Ed Flanders, Jason Miller, Neville Brand, George DiCenzo, Steve Sandor, Joe Spinell, Moses Gunn, Richard Lynch, Robert Loggia, Tom Atkins, Tonsi
Only the toughest, gentlest agape could bear and prevail in spite of the rigors suffered by a decorated USMC Colonel and accomplished psychiatrist (Keach) assigned to analyze unhinged military personnel cloistered at a disused castle in a Pacific Northwestern forest — the last installation of a network constituted to probe the mystery of psychoses shared by officers whose high IQs are their sole commonality. His charges encompass the multiple personalities of a captain (DiCenzo) compelled to assume vestments of nuns and pirates, two squabbling lieutenants (Miller, Spinell) planning Shakespearean plays cast with canines, and an atrabiliar astronaut (Wilson) whose mind snapped during the final countdown of his lunar mission’s launch. With quiet gravity, Keach’s unorthodox counselor attains advancement with his raving patients by confiding as much in them as in the sardonic chief medic (Flanders), stolid sergeant (Atkins) and furious, frayed major (Brand) under his command, but the arcana of his own pathology and identity threaten to unravel far more than his progress. His directorial debut adapts to the screen Blatty’s eponymous rework of his novel Twinkle, Twinkle Killer Kane with copious quotas of spectacle and substance, humor and horror, lunacy and humanity to illustrate the Christian postulate of benignant sacrifice as a manifestation and evidence of God. During the first hour, Keach plays an especially sedate straight man to co-stars portraying the madmen in his care, each yattering inspired tangents and amusing non sequiturs whilst chaffing with one another and Flanders’ ballasting, quipping colonel in scenes as arresting as hysterical. Blatty’s brilliant syntheses of comedy and profundity urge his story along while occasioning bounteous unforgettable moments: eyeballed by a scowling Moses Gunn, Loggia’s lieutenant sings and dances to Al Jolson’s There’s a Rainbow ‘Round My Shoulder in blackface; Miller’s beleaguered director manqué berates his star puli (Tonsi) while propounding a theory concerning The Bard’s brooding Dane from which one of his analyst’s most successful apercus issue; in a static shot recalling Blatty’s early comedic projects (especially his collaborations with Blake Edwards), stationary Keach observes the passing, progressively wacky trumpery of his screwy segregates with silent aplomb during a propitiatory phase of their therapy, during which they’re encouraged to reenact The Great Escape and stage a production of Macbeth starring a doggery. Most famed among this picture’s iconography is the culmination of a wildly subversive oneiric scene wherein an astronaut plants the American flag on the lunar surface, then turns to apotheose the Crucifixion as Keach’s narration controverts a fundamental theory of macroevolutionary origin. The directorial greenhorn’s stylistic simplicity relegates in close-ups and wide, confrontational shots focus and rightful encumbrance to his players, and those allotted monologues in service of exposition and insight do them justice with a plausible, impassioned subtlety that never clashes with daffy antics always but a few minutes removed. In discourse as much as sequence, so much is expressed in shrewd subterfuge and allusion that the ingenuity of Blatty’s dialogue and prefiguration can only be best appreciated during a second viewing. In contrast, one of the most powerful slow burns yet committed to film depicts a failed, formidable struggle by Keach’s colonel to peaceably rescue an inebriated and despondent Wilson from a flamboyantly sadistic gang of bikers (Sandor, Lynch, et al.) as riveting as the flare of a fuse crawling to its dynamitic detonation. A veteran of Hollywood, Blatty’s superior aesthetics and cognizance of his medium’s secular terrain inhibited any ply for sanctimony; he knew full well that homilies and catecheses can’t survive beyond the bounds of ecclesiastic milieus, and that evangelism in entertainment can only succeed in a mundane context. His message of divine redemption through mortal sacrifice obliged by a distinctively Christian love is packaged as rapid-fire badinage, slapstick comedy, compassionate drama, thrilling violence and a conclusive epiphany that even nullifidians can accept as an inspiring axiom: that individual rectitude matters in a fallen and ignoble world. Whether it signifies absolution, atonement or providence is a question of faith.

3 thoughts on “Favorites: The Ninth Configuration”