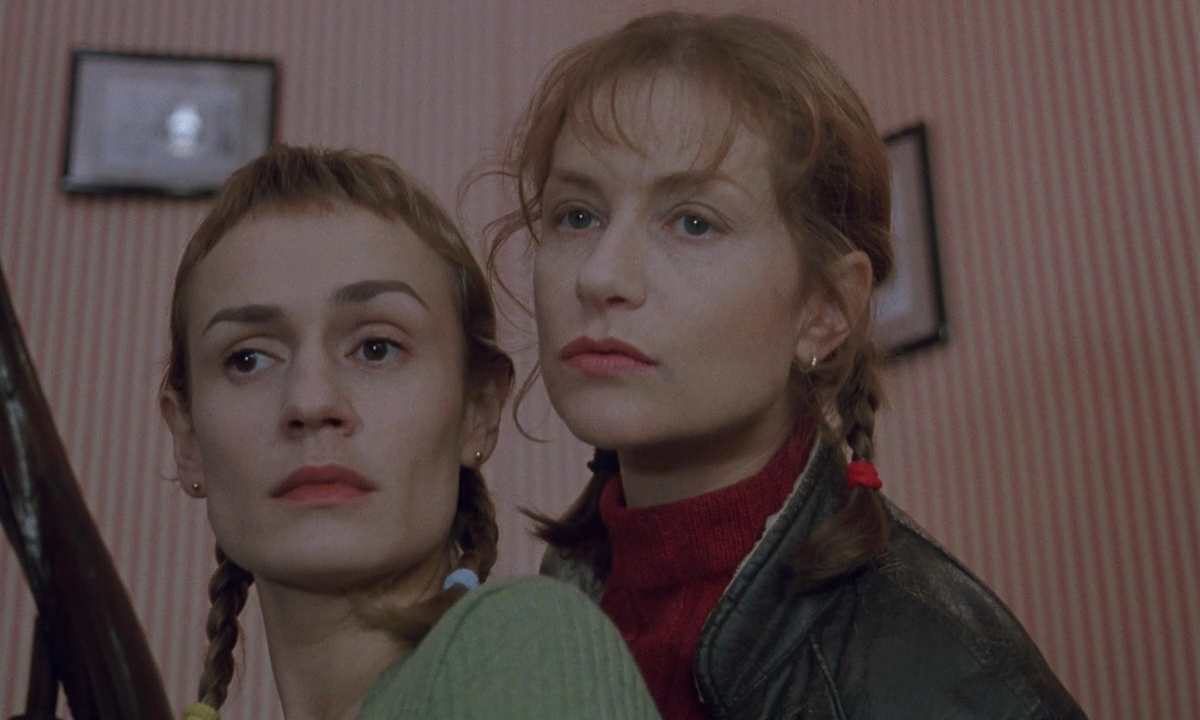 La Cérémonie (1995)
Directed by Claude Chabrol
Written by Ruth Rendell, Claude Chabrol, Caroline Eliacheff
Produced by Marin Karmitz, Christoph Holch, Ira von Gienanth
Starring Sandrine Bonnaire, Isabelle Huppert, Jacqueline Bisset, Jean-Pierre Cassel, Virginie Ledoyen, Valentin Merlet
Over shared secrets, scuttlebutt and dudgeon, an industrious and taciturn housemaid (Bonnaire) and pertly obtrusive postmistress (Huppert) bond at the convergence of their scandalous lives shortly after the former’s hired by a gallerist (Bisset) at her husband’s (Cassel) Lucullan rural estate. Under the clerk’s impertinent influence, her only friend’s limited occupational relations deteriorate with a swell of recusancy until jaundice peaks to a bloody fever pitch. His distinctly Marxist merger of the Papin sisters’ notorious murders and Rendell’s popular novel A Judgement in Stone bespeaks Chabrol’s inspiration via Sartre’s politicized interpretation of the former, but this is no cheap or simple dogmatic allegory: notwithstanding their unintentional condescension, his wealthy victims are as bountiful as beautiful, erudite and evenhanded, while the unhinged yet animate antagonists of the underclass reject responsibility with contumelious abandon. Instead, Chabrol imputes detriment to division of class; despite all her employers’ best intentions, Bonnaire’s peripheral domestic is an isolate at a social margin, while Huppert’s dominant intimate is as much a creation of neglect as of madness. Not since his derided, deliberately desipient Tiger series had Chabrol’s style so plangently echoed Hitchcock’s, and never ere so elegantly: players step to close-ups, conspiratorial zooms emphasize unabashed confessions and confrontations, interstitial shots are framed in residential and vehicular interiors, pans repeat subsequent to dissolves and overhead shots rotate in ascent. Sparing, subtle foreboding’s manifest in verbal suggestions, creepy little surprises and the direful strings of a fine score penned by Chabrol’s son and preferred composer, Matthieu. As fans and others familiar would expect, the leads are sublime for their elan; without a word, relinquishing her vanity and nearly uglified by gauntness and a heinous, proletarian haircut, the usually beautiful Bonnaire evinces heart-rending frustration with tearful contortion and gall by glares, a fitting foil for jabbering Huppert as an impenetrably unrepentant accomplice in a part that any lesser actress would likely overplay. Neither might a false note be heard from their co-stars — Bisset’s infallible even under the baton of hopeless hacks, but her painstaking presence and nuanced delivery couldn’t feel more natural. At an age when he’d all but abandoned ideology, Chabrol concocted to almost universal acclaim a work of sneeringly sophisticated agitprop and blackest humor that may be enjoyed as an acute crime drama, but whose implications publicize the concerning conspicuity of servitude, humiliation ensuing crippling ignorance, and consequences of indigence. Worse, his perverse pair personify every sick or uncultivated little girl permitted to grow into a mundane monster.
Recommended for a double feature paired with Rope.