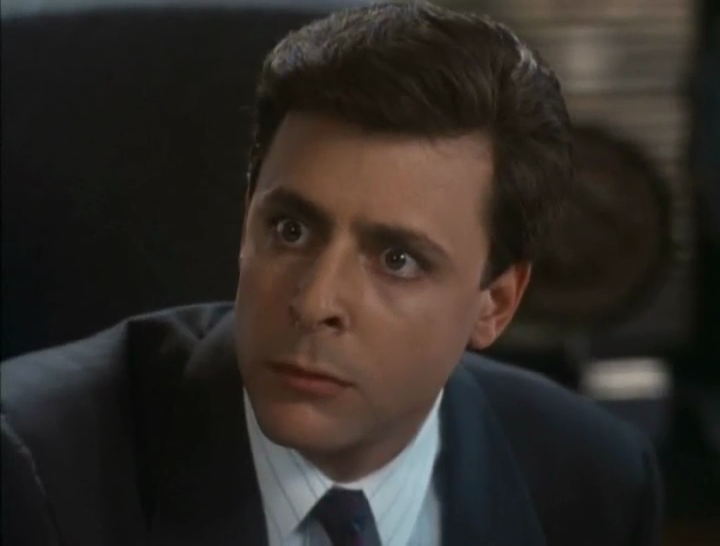 Billionaire Boys Club (1987)
Directed by Marvin J. Chomsky
Written by Gy Waldron
Produced by Marvin J. Chomsky, Marcy Gross, Ann Weston, Donald March, Tim Myers
Starring Judd Nelson, Brian McNamara, Fredric Lehne, Raphael Sbarge, John Stockwell, Barry Tubb, Stan Shaw, James Sloyan, Dale Dye, Robert Krantz, John Dye, Jill Schoelen, Eric Larson, Allan Miller, Alan Fudge, Peter Jason, Robert Hallak, Ron Silver, Shirley Knight, James Karen
Testimony at his trial condemning entrepreneur Joe Hunt (Nelson) frames and rotates with cutbacks, professed primarily by his secondary (McNamara) and the brothers (Lehne, Sbarge) who with him formed the nucleus of the charismatic broker’s investment firm and social club, which swelled by dint of their society to an approximate score (Stockwell, Tubb, Krantz, Larson, et al.) beguiled by blarney and promises of rich returns well before they realized that the business was a front for a Ponzi scheme, or that Hunt and his strapping security director (Shaw) murdered a notorious confidence man (Silver) as lucrative requital. A second death, proceeding from the fledgling syndicate’s abduction of an Iranian opium smuggler in collusion with his son (Hallak) to coerce concession of his estate’s conservatorship to their mutual profit, generates sufficient evidence to bring the principals to heel after it’s cumulated and delivered by Hunt’s renegade employees to local police, the FBI and SEC. Telecast mere months after the actual trial, the cheesily dusted miniseries from which this feature of three hours was crudely recut and catenated (and shorn of nearly twenty minutes) is an account of Hunt’s felonies seemingly free of any defamatory or unbelievable liberties. In their quality, its performances vary jarringly for Chomsky’s limited direction. McNamara’s subtly superb as the former corporate mainstay granted immunity from prosecution, and Silver was born to play stingers as smoothly, sleazily shifty as his doomed diddler. Lehne and Sbarge look congruous, but the latter’s sillily sprightly as the more gullible of the fraternal yuppies. Most of the engaging actors are concentrated at the picture’s periphery, such as perennial toughie Jason playing the lead detective investigating the murders, Shaw imposingly channeling his inner Bernie Casey, Hunt’s girlfriend’s fleetingly enacted by Schoelen at her fetching best, and glowering Karen, accorded but twain scenes as Lehne’s and Sbarge’s father. Nearly everyone else is acceptably credible, but Nelson’s delivery is as volatile as Hunt’s reputed behavior. He’s gogglingly great whenever boosting his underlings with pep talks peppered with advocacy of an amoral and pragmatic relativism, radiating both a personable pertness but also the ruthless vacuity peculiar to the sociopath. However, his portrayal of Hunt’s despair and frustration are hilariously hammy, attesting Chomsky’s slack management of a production expedited to exploit coetaneous events. Despite the affluent trappings of expensive cars, homes and apparel, budgetary limitations are occasionally obvious, as when a sartorial montage is presented in photographs that should’ve been footage. Waldron’s script is structured optimally to compress events for comprehension, but extensive exposition in his flashbacks is largely as clunkily leaden as unnecessary, considering the service of judicial interrogation in this capacity. Similarly, some tracks of Jorge Calandrelli’s score are crisply reminiscent of Faltermeyer’s most memorable compositions, while others are as ludicrous as any noodlings uttered by a DX-7 for prime time. It’s acceptably agreeable for the enduring fandoms of Nelson, Jason, Schoelen and Karen, or anyone who wants to observe just how criminally ambitious and incompetent bright, avaricious arrivistes and rich kids can be.
(A newly launched website whereby Hunt’s friends and family endorse his exculpation publicizes an endeavor more likely to bear fruit than any hope that this movie’s remake will recoup its budget.)