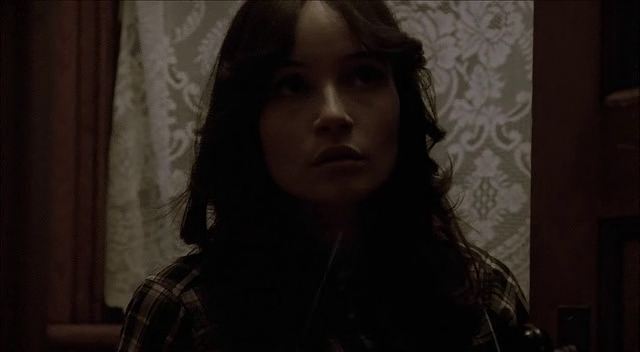 They’re almost as often botched as assayed: period pictures representing the 1980s seem unattainable undertakings for millennial filmmakers, their generation virtually defined by inauthenticity and the pervasive nescience of their precious sociocultural tabula rasa. At worst, even the era’s trappings are inadequately recreated: rather than earth tones, neon and pastel accents and accoutrements predominate in ’82; leg warmers are garbed glaringly as late as ’88; working- and middle-class households enjoy amenities of appliances and entertainments they couldn’t possibly yet afford; no residua of the ’70s are observable, be they tacky decals, ill-conceived drapes of pea-green and brown paisley or stripes, or enduring, smutty shag sprawling wall to wall. Worse, when an informed crew have replicated interiors, vesture, chattels, etc. so well as to excite the very zeitgeist for those of us who remember, the fastidious facade is shattered the moment an actor utters either parlance scripted in poor imitation or a contemporary vernacular voiced via uptalk and other insufferable habitudes.

West and his crew clothed his slow, steady exploitation of the bygone satanic panic with a rare verisimility to polish one of a few top-notch American horror flicks produced during the aughts. Its scenario would in lesser hands seem like hackery: yearning for privacy, repulsed by her slatternly roommate and desperate to secure her first month’s rent for lodging at an inviting rental house, a cute collegian (Donahue) leaps at the opportunity to babysit for an elderly couple (Noonan, Woronov) with an avidity abated by their conditional oddities, but her dubiety and suppressed suspicions prepare her neither for their grisly intrigues nor her Luciferian fate, engrossed upon a lunar emersion following the night’s total eclipse. Sagely refraining from complete pastiche, West instead incorporates techniques popularized in the ’70s and early ’80s into his vigorous idiom. Frames frozen during opening credits, lingering close-ups and zooms of varied velocities amplify tension, stress vehemence and arrest the eye. He’s incapable of a poor shot — whether still or creeping thwart and through hallways, enfilades and immaculately dressed rooms — and maintains pace and consistency by cutting his faintly grainy, chromatically rich Super 16 footage with a punctilious art worthy of his script, complete for its shades of portent and playful, preordained protagonist’s expatiating exploration of her employers’ mansion to establish spatial and tonal parameters, and raise the eyebrows of those most wakeful in her audience. Notwithstanding a few anachronous elements (a payphone accepting quarters, car alarm and latter-day faucets), this picture’s immersive for Jade Healy’s transformative production design, Robin Fitzgerald’s charming costumes, and meticulous art direction courtesy of Chris Trujillo, all complemented by Mike Armstrong’s memorable opening tune and fantastic faux newscasts helmed by second unit director/sound designer Graham Reznick. Only a few lines delivered with present intonation remind one fleetingly of Donahue’s contemporariness, and her achingly lovely, post-Celtic phenotype is as becoming of the era as her high-waisted bluejeans or knit scarf. She’s all but perfect in the role of unwitting tour guide and victim, but still spicily upstaged in their every shared scene by indie darling Gerwig as her crude, cheeky, feathered best friend. Both are foils for Noonan and Woronov, veterans of creepy roles who expertly enact a gentility veiling subtly subjacent menace. Disregard naysayers who misrepresent West’s cunningly cultivated suspense as longueur by omitting one of the best jump scares at which you’ll ever flinch, and that his prolonged preludes lead to a strobing, severely stridulous and sanguineous climax. Both the gently foreboding, pianistic themes and quintet’s strepent strings of Jeff Grace’s score, as well as adjunct music and painstaking audio design by Reznick and foley artist Shaun Brennan, intensify without disrupting disquiet of many key scenes. Few of West’s Anglophone coevals (Carruth, Mitchell, Cosmatos) evince an apprehension of their medium’s dramatic, thematic and technical dynamics so penetrating as his; well aware that the devil’s in the details, he, Reznick, et al. are just old enough to faithfully recall and evoke the ethos of ’83, when society was still sufficiently sane and cohesive to judge these atrocities shocking.

Recommended for a double feature paired with The City of the Dead, Rosemary’s Baby, Black Christmas or Beyond the Black Rainbow.

1 thought on “Favorites: The House of the Devil”