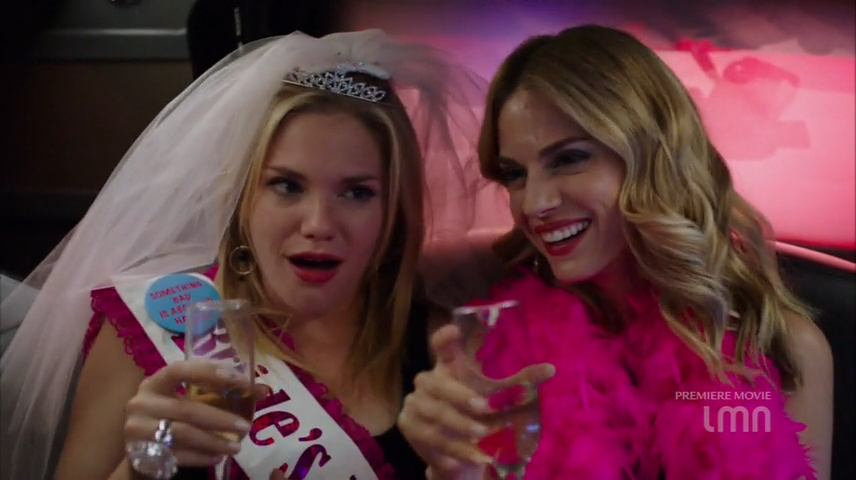 “Women complain about sex more often than men. Their gripes fall into two major categories: (1) Not enough, (2) Too much.”

Muted, the first twenty minutes of this crime drama excreted from the bowels of Lifetime could easily be mistaken for a carousal of alcoholic hookers; in actuality, it’s a bibulous bachelorette party thrown by her whilom sorority’s sisters (Kruger, Barrell, Anderson) for a copywriter (Mauzy) in a hotel room, limousine and strip club. Her loony ex-boyfriend (Blair) meanwhile abducts to torture her fiancee (Thompson), then threatens the wassailing quartet of ditzy careerists with blackmail by footage of their licentious collegiate indiscretions, coercing their fulfillment of several dicey, disgusting, destructive, absurdly agonizing and abashing tasks. None of these ladies are for their sleaze and self-righteous egoism significantly more sympathetic than their antagonist, now unhinged by a criminal trial in which he was acquitted years before that devastated his budding sporting career. Whoever can overlook this flick’s trashily garish photography (of an oversaturated sort common to televised fare or ugly features lensed by the likes of Ben Seresin), downright distasteful characters whose noisome personalities were defined by their inane collegial culture, and a few yawning plot holes may also be sufficiently suasible or dupable to believe that a rape can be inflicted by a man upon his doxy of over a year while both are drunk. Its cockamamie contrivances are sporadically fun, but this pernicious, preposterous propaganda is plainly aimed to inspire in stupidly susceptible young women the inkling that sex in any conceivable circumstance may be assault, and victimhood’s a mere question of post-coital dissatisfaction. Trash of this fashion would be decried detestable in a normal society; in those where mendacious accusations of rape are spotlit monthly by corrupt news media outlets until they’re debunked, it’s all the more repugnant for its mundanity.

Behold — the most unconvincing headshot yet shot: