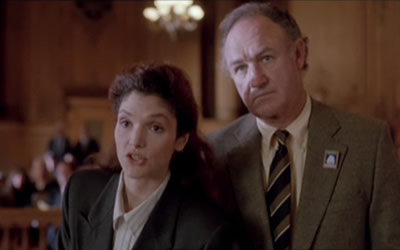 “Lawyers with a weakness for seeing the merits of the other side end up being employed by neither.”

Conflicts of interest, filial gall and malversation taint a civil suit in which 150+ plaintiffs who’ve suffered third-degree burns and loss of limbs and loved ones from a station wagon’s elusive yet replicable, often fatal flaw are represented by a lawyerly firebrand (Hackman) renowned for his demagogic shifts and advocacy for underdogs in the cause of civil rights, opposed by his disaffected daughter (Mastrantonio), a viciously efficient litigator serving as counsel of a top-grade firm to the carmaker. When it isn’t yawing into embarrassingly soppy contretemps, Apted’s juridic drama works well its eminent cast in the service of a sensational story’s gravamen, all but undone by periodic, incredibly sloppy dialogue in a script that was treated for five years in twenty-five drafts! Authenticity endued to its most engrossing legal details is likely attributable to Shad, a civilist and attorney familiar with the knotty pitfalls of such cases. Regrettably, too much running time is spent in living rooms and offices, and too little in courtrooms before the climactic third act, and at least fifteen of these one hundred and ten minutes are alloted to unpalatably saccharine filler. Only faltering for delivery of their very worst lines, Hackman, Mastrantonio and most of the supporting cast are otherwise as excellent as expected, mirabile visu when judicially sparring. Effectively reprising his corporate crook from Darkman sans slaughterous intent and Raimi’s high camp, Friels is divertingly conniving and not without some genuine humanity as an accessary partner in Mastrantonio’s firm and bedroom, but both are bettered by Moffat, whose stiffly upstage bearing as their chief counsel precludes any notion of another in the role. Similarly, Thompson smoothly underplays an unconscionable automotive supervisor clearly unruffled by incidental deaths; would that Jan Rubes (who isn’t half so hammy here as in Dead of Winter) weren’t so goofy as one of his former electrical engineers, a witness as vital as stultifiable. All of this picture’s best and worst traits can be observed in a few microcosmic, consecutive scenes early in its second act: after Hackman’s wife and Mastrantonio’s mother (Merlin) mawkishly expires at the steps of a courthouse’s concourse, her sequent funeral’s almost unendurable for its gospel atmosphere and an anecdote recounted in Hackman’s eulogy, which both beggar bathos of ordinary conception. A pleasant, private dinner between father and daughter, subsequent essay to casually overcome their estrangement before her acrimony surfaces regarding his extramarital infidelities and professional repercussions, and an ensuing feud showcases both performers at the plausible pinnacle of their powers, both hitting their marks with reciprocal timing and expression as credible as any they’ve delivered…until this affray culminates to a cliche as corny as a contrivance from Law & Order‘s seventh season. That it so often descends into such mush is truly unfortunate, for this movie posits insights not explored in too many others: how calculation of actuarial expenses inspires automotive manufacturers to expose their emptors to terrible risk; that personal tragedy may eventuate from even the most noble judicatory achievement; how the sanctimony of social activism too often veils and feeds an inherently selfish nature; inadvertently, that common careerism can’t be conciliated with a healthy personal and particularly familial life. That last applies to both genders. Following an entertaining clash in court and the judge’s (Clark) chambers, dessert consists of a conclusion so sentimental that any viewer thereof whose lifeblood isn’t pure syrup may from their horripilation suffer a dermic malady. Essential viewing only for fans of Mastrantonio and especially Hackman, it’s not without some great moments…and at least as many schmaltzy enough to discountenance anyone who watches in good society.

Recommended for a double feature paired with The Verdict.