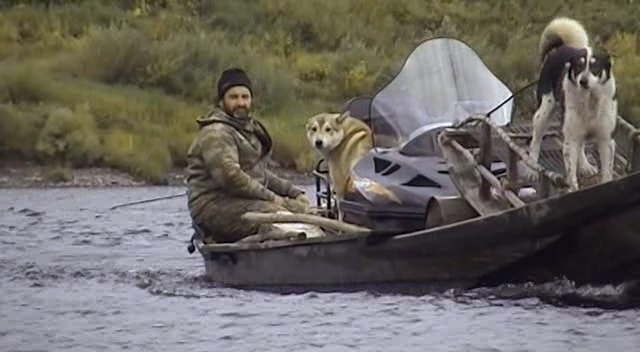 Happy People: A Year in the Taiga (2010)
Directed by Dmitry Vasyukov, Werner Herzog
Written by Dmitry Vasyukov, Werner and Rudolph Herzog
Produced by Vladimir Perepelkin, Christoph Fisser, Nick N. Raslan, Charlie Woebcken, Thomas Nickel, Robyn Klein, Werner Herzog, Yanko Damboulev, Timur Bekmambetov, Klaus Badelt
Starring Gennady Soloviev, Anatoly Blume, Anatoly Tarkovsky, Nikolay Nikiforovitch Siniaev, Werner Herzog
Not despite but for their travails do the isolated inhabitants of Siberia’s frigid forests delight in rural survival. Vasyukov’s televised documentary of four seasonal episodes is freshly compressed and concatenated, lushly (if excessively) scored by Klaus Badelt and narrated by Herzog with his usual phlegm as a feature uncovering a challenging, cheerful life of denizens from the village Bakhta in Russia’s Turukhansky district, specifically those of rugged outdoorsmen (Soloviev, Blume, Siniaev, Tarkovsky) therefrom who handily eke out subsistence as trappers, hunters and fishers in the snowy, sylvan sprawl well beyond their little community’s bourne. During this region’s snowed spring, Soloviev cares compassionately for pups, curs, and seasoned hunting dogs alike of his doggery, fells a tree to split wood from it that’ll later be fashioned into skis, contrives by carving and sets from two slender trees a deadfall of cunning design, perorates of his methodology and tools, denounces greedily unethical trappers, and rehearses his first onerous Siberian season forty years antecedent, which he scarcely survived. Blume conterminously shovels towering mounds of snow from the roof of one hut among several outlying a central shack within his designated territory (a configuration typical of all the trappers’ winter dwellings), and collects firewood. While the vast ice floes constituting the surface of the Bakhta River (and Yenisei River of which it’s a tributary) begin to flow north, children of the village skate about on thawing ice before their community first celebrates Maslenitsa by dancing and burning a straw, female effigy of winter, then Victory Day a week later, when wreaths are laid at the headstones of veterans who perished in WWII. One experienced Ket craftsman and an apprentice carve, widen, temper and pay with traditional methods canoes from tree trunks that are then boarded on exordial expeditions to train pups for future hunts, and with submerged toils catch fish, the choicest of which are smoked to be eaten later. Beasts and greenery emerge in profusion come summer, when fishing yields jumbo pike, and hunters collaborate to construct new central and collateral cabins while beset by swarms of mosquitoes, which are repelled by a topical concoction of tar distilled from birch bark and cut by immixture with fish oil. With the aforementioned wood split in the prior season, Soloviev and his son skillfully saw, carve, steep, flex and temper several pairs of skis. Driftwood collected upriver is towed to the shore, where Kets without occupational options chop and load it onto a truck’s bed. Although this Yeniseian minority’s elders struggle to preserve fading traditions, its community is mired in poverty, alcoholism, and resultant mischances. During comparatively warm days spanning twenty hours each, plentiful gardens are cultivated and planted, greenhouses mended, and chipmunks, sables and malleting, grinding, sifting humans all collect pine nuts from cones. Late in the season, an incumbent, regional candidate campaigns by cabotage, arriving at Bakhta’s shore to tempt his largely indifferent constituency with a largesse of wheat and promises of reform before belting out a pop song with a trio of pretty female singers to entertain some congregated children and teenagers. Walls of stacked firewood, a massive harvest of fruits and vegetables planted months afore, and thousands of freshwater fish netted along the shoreline or lured by fire nocturnally to be leistered all portend autumn’s advent. As the great Yenisei River rises for constant rainfall, and before its surface freezes, the hunters load their sleds and snowmobiles, dogs and provisions into canoes to convey them to their shanties; in high water, the rapids’ fluxion often can’t be countered by these boats’ offboard motors, and exact for some such as Soloviev and his son manually arduous navigation. After they part, the elder trapper repairs damage inflicted by bears to one cabana, reposits there comestibles, shoots a woodcock and feeds its neck and feet to his dogs. While the rivers flow, pike are primarily caught to be fed to canines. Forbidding Tarkovsky (a junior cognate of Andrei) hunts and fishes with effectual craft, caches by suspension and elevation bread, grits, sugar and other aliments where neither bears nor mice can reach them, extols the simple pleasures of his lifestyle and sets mechanical slings to catch game. Soloviev expatiates on the ideal lineage, proper rearing, and necessity of dogs to any able hunter before one of his own predates a marten that he expels from a fallen, hollowed trunk. Winter finds the village’s anonymous blacksmith forging a sharp shaft used to pierce the river’s icy surface and enable more subaqueous fishing. During these most trying months of sustained yet stimulating slog, two events showcase the mettle of these woodsmen and their canine companions: fatigued after a day’s labor, Blume retires to an ancillary hut to find its roof marred by a downed tree, which he chops and removes before clearing snow from his roof to repair it with immediate and laborious effort during his dwindling dusk; en route on his snowmobile to Bakhta where he’ll sojourn with his family during its New Year’s and Christmas festivities, he’s chased over 90 miles by his dog to their home — a feat as formidable for the animal’s stamina as poignant for its loyalty. Vasyukov’s subjects represent a rustic society’s admirably hardy traditionalism, ably and objectively pictured here with fine photography and profoundly personal interviews that patefy an independence and integrity too uncommon in the developed world.

Recommended for a double feature paired with Encounters at the End of the World.