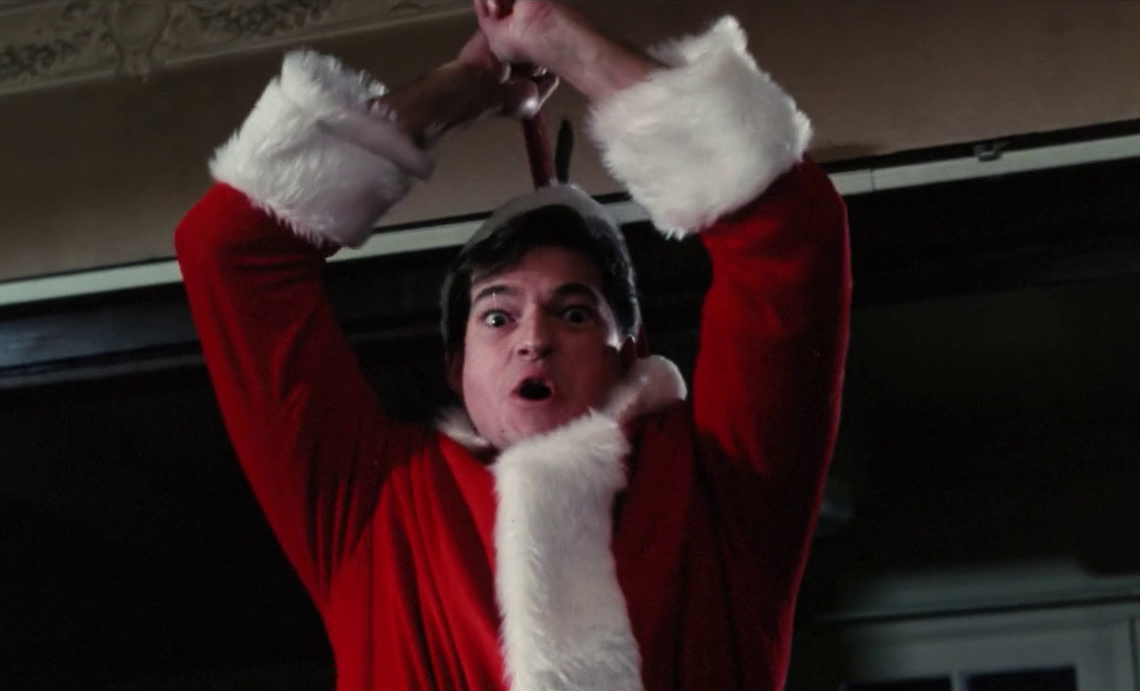 Accumulated traumas create a killer from an orphan (Best, Wagner, Wilson) whose parents are slain by a homicidal nut (Dierkop) costumed as Santa on Christmas Eve, after formative years of sexual suppression and chastisement inflicted by his orphanage’s abusive, obtusely injudicious Mother Superior (Chauvin), then harassment from a odious coworker (Stumpf). This toy store’s stockboy finally snaps when selected by his boss (Leach) to entertain children as Santa, and paints his town red with its locals’ blood.

In Part 2, his younger brother (Freeman) recounts his slaughterous sibling’s exploits, then his own to a psychiatrist (Newman) in the mental ward where he’s imprisoned, before he escapes to confront his Final Boss: Mother Superior!! (Miller)

The first Silent Night is a pedestrian slasher that slogs through its vapid vignettes with perfunctory predictability. In spite of its superabundant cutbacks, the sequel’s bloodletting is more engaging and incoherent.

All others in these casts rate from mediocre to abominable, but Freeman elevates Part 2 to delightful camp by interpreting the junior murderer miles over the top with malicious zest and waggling eyebrows.

Perry Botkin’s score would be unlistenable were it as pestilential as Morgan Ames’s and Doug Thiele’s doo-wop ditty, Santa’s Watching.

Killing sprees perpetrated by Freeman’s bloodthirsty psychopath are hysterical for his wacky diction and idiosyncrasies. A famous moment therein was memed years ago, but it’s best witnessed in its entirety.

After a profitable opening weekend, Silent Night was picketed by activists during their ample spare time who successfully pressured Tri-Star to withdraw it from theaters a fortnight following its premiere. Without zany Freeman, these otherwise unremarkably cheap horrors would have no cult, and transient remembrance.