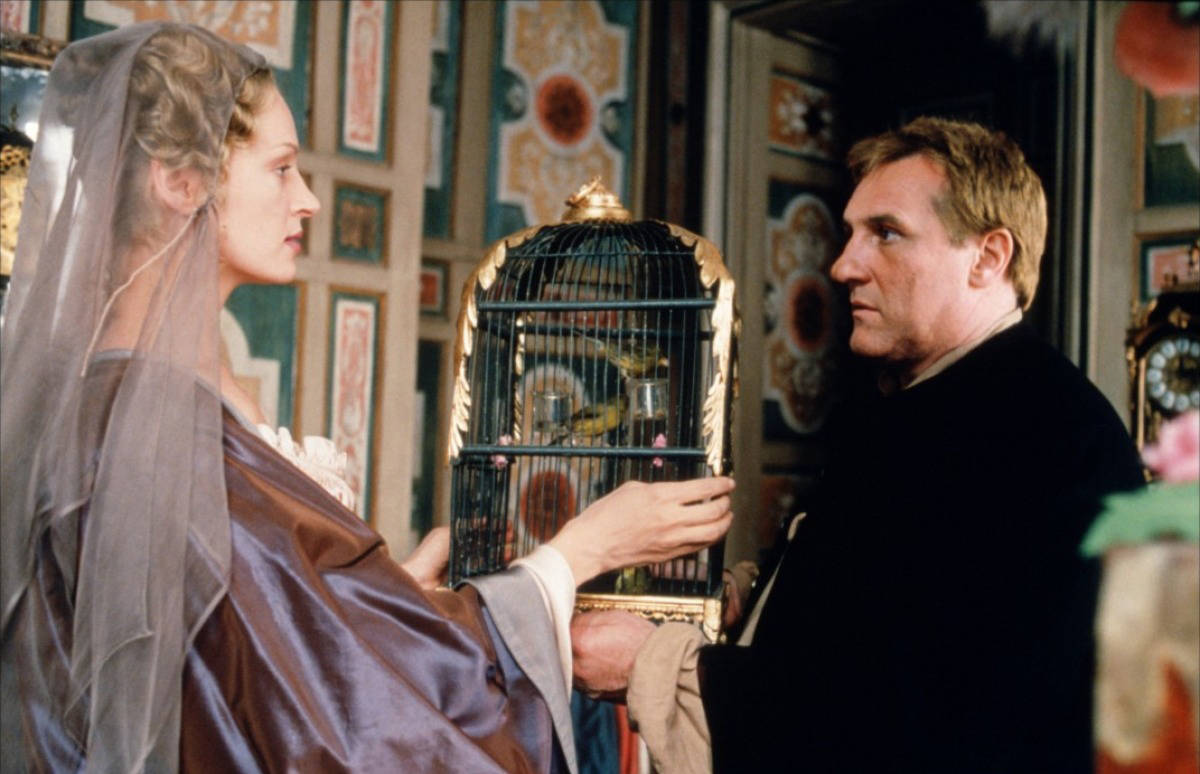 “An aristocracy and a despotism differ but in name.”

Among those extravaganzas conceived and organized at the behest of Prince Louis II de Bourbon-Condé (Glover) by his majordomo François Vatel (Depardieu) for a fete of three days in April of 1671 to the pleasure of a visitant King Louis XIV (Sands) and two-thousand attendees, most notable were: three regales comprehending plentitudes of savory and innovative delicacies; resplendently imaginative stages upon which renditions of Rameau’s Hippolyte et Aricie sung by the prince’s wife, princess and chanteuse Claire-Clémence de Maillé-Brézé (Dombasle), and La Bourree, Colonna’s Absalom, and Handel’s Music for the Royal Fireworks accompanied by coruscating pyrotechnics are performed; intricately icy statuary in transience; the master chef’s suicide upon notification of his commission to serve the King in Versailles. Those famed feasts were likely of greater interest than this gorgeous yet turgid fictionalization, bloated for its stiltedly, excessively expositional dialogue treating of historic immediacies, improbably melodramatic royal intrigues, Joffé’s ham-fisted avian metaphors and a romance as silly as superfluously stale that bickers between Vatel and one fictive Anne de Montausier (Thurman). One needn’t agonize to ascertain what’s exquisite and excruciating here. Prandial pageantry victualed by Depardieu’s wonderworker are enough to satisfy even the most discriminating gastronomer, sets designed by Françoise Benoît-Fresco and Eric Viellerobe under the accomplished instruction of art directors Hervé Gallet Louise Marzaroli are ever more inventive, and Yvonne Sassinot de Nesle’s costumes are as much an eyeful, despite the anachronistically luxuriant liberties she indulged for the fabrication of certain dresses. Under their director’s limp baton, the cast yields mixed results…Depardieu and Glover acquit themselves adequately in spite of a prosaic script; typecast as a foppish fink after upstaging the leads of Rob Roy, Roth’s entertainingly hammy as a knavishly conniving Antoine Nompar de Caumont; Thurman and Sands seem to vie for the worst performance of both this picture and all others of its millennial year. Though Sands is the more accomplished in his field of atrocious acting, and dretching enough for his ludicrously wooden delivery, Thurman prevails for her gawky postures and insufferably stiff diction. They’re egregious, both far worse than Dombasle, who’s fine as an appurtenant player in many of Rohmer’s dramas, but struggles here to verbalize credibly in English. Similarly, the score may be Ennio Morricone’s worst — mincing, perfunctory pap that recommends how its audience should feel when viewing nearly every shot. Those most interesting scenes find Vatel plying a bricoleur’s ingenuity to compensate for shortages when preparing culinary and staged spectacles for the idle, deviant, hedonistic, mischievous royals of the belligerent Sun King’s court, as the despot contemplates le Grand Condé‘s fitness to lead his army against the brazen Dutch. Otherwise, the cliche conspiracies concocted by Labrune belie their refined trappings and sumptuous setting, Condé’s ritzy, restored Château de Chantilly and the stupendous stateliness of its luxe library and grand gardens in transition from the jardin à la française. Thurman’s pointless character overshadows the dynast’s fascinating and fecund mistresses — Louise de La Vallière (Ohana) is scarcely sighted, and Delterme’s fetching yet fleeting as Françoise-Athénaïs de Rochechouart de Mortemart. Monsieur Duke of Orléans Philippe I (Young, nigh as daffy as Sands) and his minions destructively disport and pursue pederasty as his regal elder brother strains to defecate behind a screen while colloguing with Condé, whose serfs and servants suffer indignities and an unfortunate death while their tormentors repast and relish their spreads and entertainments. Joffé’s career was years into its decline when he consumed this picture’s promise, and while his contrast of these nobles’ abuse and debauchery with the helot’s hardship is as justified as artlessly blatant, his disregard for the actual accomplishments of its hero and malefactors is unforgivably philistine. Here, the misattribution of crème Chantilly to Vatel’s origination is perpetuated, his suicide provoked by an unlikely aversion to servitude; in reality, he was an exemplary maître d’hôtel of two Lucullan banquets who buckled under the pressure of the second and rashly took his life when he wrongly assumed that a consignment of fish wouldn’t arrive in sufficient time for the preparation of seafood. A comedy of his exploits and demise would’ve been more engaging and dignified (if not palatable), but so too would an impartial biopic concerning any of the historical figures misrepresented and derogated herein. Miramax distributed this Anglo-French production stateside, released concurrently and thematically parallel to their popular, preposterous Chocolat: yet another overproduced, Anglophone, cinematic calumniation of French history depicting it as a struggle between racist, sexist, classist, unjust Gallic society and its beauteous, talented, tyrannized latitudinarians — a class of pablum on which British and American hausfrauen and their fat daughters gorged themselves epulose, while Harvey Weinstein sexually harassed and abused dozens of actresses on two continents. Those are the cattle for which this provender’s intended; sybarites and cineastes may enjoy the filigreed luxury of its production and art design, but beneath its surface, they’ll find only a scurrilous soap opera swilled to surburban swine.
Instead, watch The Madness of King George. 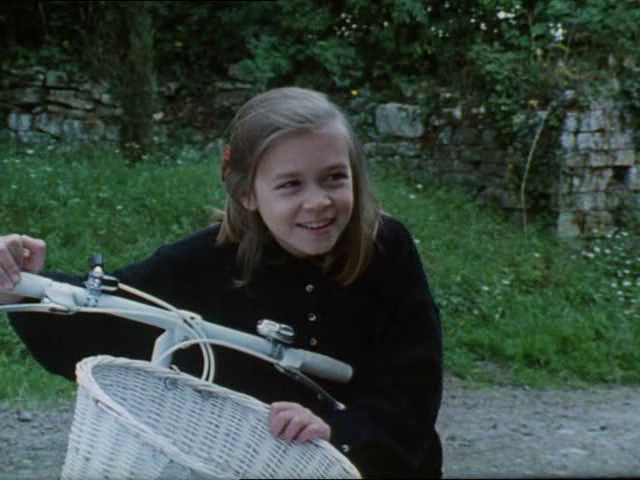 The Tree, the Mayor and the Mediatheque (1993)
Directed and written by Eric Rohmer
Produced by Françoise Etchegaray
Starring Pascal Greggory, Clémentine Amouroux, Fabrice Luchini, Arielle Dombasle, Galaxie Barbouth, François-Marie Banier, Michel Jaouen, Jessica Schwing
What for a Costa-Gavras or Loach might seem paradoxical was for Rohmer congruent: his most political feature’s also among his lightest, contextualized in seven parts of as many crucial consiliences from which its plot proceeds. To promote education, entertainment and his career after a loss in a regional election, a benign socialist mayor (Greggory) more familiar with the lush, beauteous botany of his rural town than his own constituents designs to fund the construction of a cultural and sporting complex incorporating a library, theater, pool, record retail outlet and expo center. His unexpected obstacles include a grand old white willow scheduled for extirpation upon the projected building site, and its most clamant champion, a feisty, irate, emphatically apolitical schoolteacher (Luchini) intractably opposed to this scheme. A penetrative magazine editor (Amouroux) dubious of both men interviews all of the town’s involved and affected parties, and finds herself stymied less by corruption than limits of pagination and journalistic virtue. Equally unimpressed, the mayor’s contentious (though hardly eristical) girlfriend (Dombasle), a Parisian novelist dedicated to urbanism, courts companionable contestation with everyone, especially her swain. As stalwart an environmentalist as a Catholic, Rohmer cunningly conferred to these characters his own convictions or their antitheses: Luchini’s preceptor elaborates the veteran cineaste’s antipathy for industrial encroachment, the environmental taint generated by automotive proliferation and the sprawl of freeways, and logistical inefficiencies engendered by the enforcement of global trade, while Greggory’s mayor disdains Parisian centralization of culture and aspires to revitalize his pastoral home. Ironically, both men suspect one another of base motives — the excitable educator colligates his grievances into erroneous speculation that urbanist’s ambitions incite his phytolophilic mayor, who in turn surmises the teacher may be a pawn of a disgruntled green faction — without imagining the actuality of their kindred sensibilities. Bucolics of Saint-Juire-Champgillon such as farmers, a shopkeeper and a toller interviewed by Amouroux in character respond with a charming provincial candor that fortifies this production’s verisimilitude and furnishes insight into the lifestyle and ethos of the French rustic. As always, Rohmer inspires in his cast exceeding performance in the enactment of his script’s attic monologues and exchanges. Beyond matters aesthetic, architectural or ecological expounded throughout, the laudable subtexts that validate Rohmer’s political maturity are those that doomed this picture to international obscurity, affirming that even local politics present more problems than solutions, and that neither national nor individual character can be resolved with an inhuman ideological dichotomy.