The Chase (1966)
Directed by Arthur Penn
Written by Horton Foote, Lillian Hellman
Produced by Sam Spiegel
Starring Marlon Brando, Angie Dickinson, Jane Fonda, James Fox, Richard Bradford, Janice Rule, Robert Redford, E.G. Marshall, Henry Hull, Robert Duvall, Miriam Hopkins, Clifton James, Joel Fluellen, Martha Hyer, Diana Hyland, Nydia Westman, Jocelyn Brando, Steve Ihnat, Katherine Walsh, Marc Seaton, Paul Williams, Malcolm Atterbury, Bruce Cabot, Maurice Manson, Steve Whittaker, Davis Roberts, Pamela Curran, Ken Renard
Natives of only a few regions have been so frequently and grotesquely distorted in Hollywood’s productions as those of the reconstructed south, where a middle-aged, middle-class, terrible Texan trio (Bradford, James, Ihnat) crazed by booze and white privilege run amok in their town by harrying and terrorizing blacks (Fluellen, Roberts), drubbing their sheriff (Brando), and pursuing with intent to kill a jailbroken scapegrace (Redford) involved in a murder. A year before he and Warren Beatty focused the energies of and popularized nascent New Hollywood, Penn helmed this zany, overheated, overpopulated clunker masquerading as social drama, which condignly ravaged Spiegel’s career. Playwright and novelist Foote is reportedly renowned for the naturalism of his dialogue; one can only conjecture that both he and Hellman are responsible for the unbelievable, ostentatious kitsch invested in nearly every line of her script, and marvel that anyone in the cast could recite it plausibly. Among those so outstanding are Brando and Dickinson as the canny lawman and his liege wife, Marshall in the role of the town’s tirelessly enterprising magnate, and especially Bradford, who indues to his almost cartoonishly villainous banker a confounding charisma and conviction. Both are hopelessly miscast, but Duvall’s less inconsonant as a cowardly cuckold than Redford as a good ole boy named Bubber, cluelessly selected by Spiegel for his sex appeal. (Incidentally, Duvall played a cheated husband with threatening vehemence not too many years later in The Conversation under Coppola, who reunited him with Brando in The Godfather — for which Robert Evans also misintended Redford as Michael Corleone.) Approximately half of Foote’s characters behave like unhinged children, the worst of which are the most overpersonated: (ordinarily superb) Rule slithers sillily about as Duvall’s slutty spouse; Hyer hollers Bradford’s blaringly besotted wife into being; Marshall’s sappy, sententious son played by Fox is as disappointing a romantic interest as he is an heir; aged Hull’s a cornball, roaming realtor who chirps unfunny quips and peripherally insinuates himself into his neighborhood’s felonies; as Redford’s hysterically penitent mother, Hopkins irritates almost so persistently as Westman’s obtrusive, bible-banging widow. Like many movies drawn from stage plays, this is a twofold failure — stagily fake in the worst possible manner, but as overblown as its hams for cinematic liberties of gunplay and explosion. Foote’s story is fundamentally, indulgently horrible, its puny plot dwarfed by excess exposition and contrived complications, such as a pointless love triangle between Fox, Fonda and Redford. Armchair riffers will delight in an alcoholic party at the home of Duvall’s nebbish boasting some of the most jerkily wacko dancing ever committed to film. In the service of sinister sensationalism, this escape, advoutry, wassail and vigilantism might’ve been exploited as the unrestrained frolic of an exciting comedy; as a pontifical social drama, it’s a tremendous waste of histrionic talent and another of John Barry’s big, bold, blustering scores. 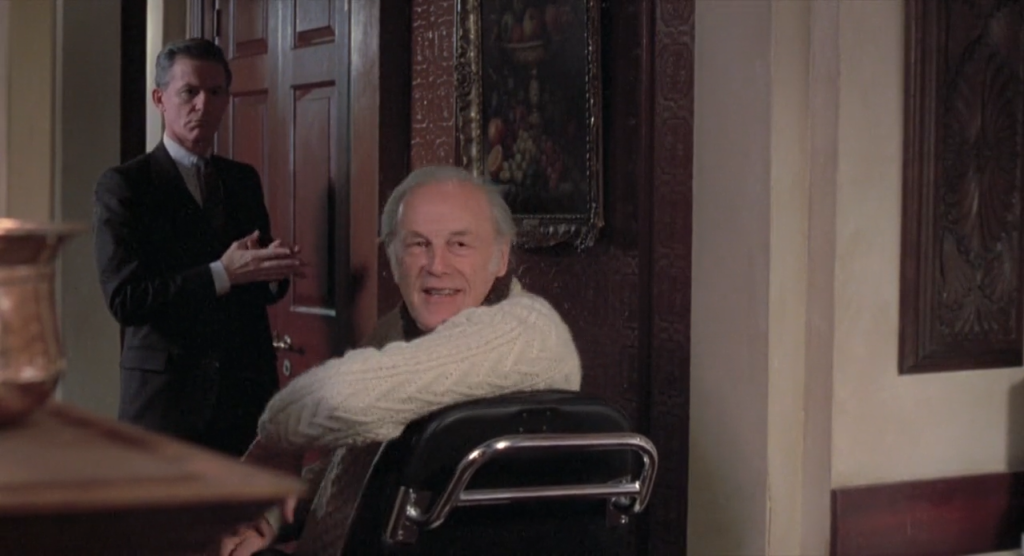 Little Big Man (1970)
Directed by Arthur Penn
Written by Thomas Berger, Calder Willingham
Produced by Stuart Millar, Gene Lasko
Starring Dustin Hoffman, Chief Dan George, Richard Mulligan, Faye Dunaway, Jeff Corey, Martin Balsam, Thayer David, Robert Little Star, Aimee Eccles
To a haughty historian, a centenarian (Hoffman) recounts a series of escapades and misadventures ensuing his pioneer family’s slaughter by Pawnee marauders, his adoption by and acculturation to a Cheyenne tribe and eventual reclamation to white society, wherein he’s a unique anomaly. A dear rapport with the chief (George) and tribe who raised the talented nebbish is contrasted often against his varied associations with a blusteringly pietistic reverend (David) and his gorgeous, goatish wife (Dunaway), one glibly inveterate mountebank (Balsam) who suffers amputations by requital for the sale of his noisome nostrums, famed gunslinger Wild Bill Hickok (Corey), and dashing, opaque, cruelly imperious Gen. George Custer (Mulligan), here disbosomed a villain by Berger’s and Willingham’s modern revisionism. Navigating both tribal and post-European cultures in frequent alternation, Hoffman’s nomad observes with his audience the eccentricities, vices and hypocrisies of both, as well as the slow, sorrowful genocide of the Cheyenne committed by the U.S. Army and their Pawnee rivals. Poignant, exciting and uproarious, Penn’s picaresque western benefits tremendously from first-rate comic performance and Hal Needham’s choreography, but the director maladroitly melds tragedy and farce in a manner that occasionally negatives the impact of either. This condemnation of bloodthirsty overreach in the age of Manifest Destiny hasn’t the appeal of Leone’s, Peckinpah’s and Hill’s classics depicting the old west’s disappearance a year or two preceding, but it’s worth revisiting for its mirth and gravity, as well as the senile makeup by which Hoffman was transformed into an ancient remnant of a history aggrieved by its hecatombs.