Diabolique (1996)
Directed by Jeremiah S. Chechik
Written by Pierre Boileau, Thomas Narcejac, Henri-Georges Clouzot, Don Roos
Produced by Gary Barber, Chuck Binder, Jerry Offsay, Bill Todman Jr., James G. Robinson, Marvin Worth, Gary Daigler, Kirsten W. Welles
Starring Isabelle Adjani, Sharon Stone, Chazz Palminteri, Kathy Bates, Spalding Gray, Shirley Knight, Allen Garfield
Chechik’s transition from direction of vacuous music videos to feature filmmaking initially produced some entertaining offerings: half of his initial theatrical quartet comprise the raunchy holiday favorite National Lampoon’s Christmas Vacation and Benny & Joon, a charmingly comedic psychologic romance in the familiar mold of David and Lisa; that the Canadian native elected to reinterpret Clouzot’s classic thriller (which he stupidly animadverted as “flawed and misogynist”) in a feminist context may be imputed to provincial idiocy, but his failure to fulfill any facet of this purported thriller only denotes a thoroughgoing ineptitude buoyed by vanity. Stone really is a wonder, and her career a testament to the enduring pull of the casting couch: how can anyone so egregiously overact by dint of such wooden delivery? After over a decade cast in prominent roles, this woman possessed yet not a grain of histrionic instinct or technique, posturing ludicrously in her supposedly sultry role as the mathematics instructor of a boarding school engaged in one of several affairs juggled by its sadistic headmaster (Palminteri) in rivalry with his pristine, cardiacally fragile wife (Adjani). Stone’s nigh beyond salvage, but Chechik’s sweeping incapability’s also transparent via his able players: Adjani and Palminteri are also uncharacteristically stiff, and Gray seems to be channeling John Glover’s fussier personae. Resembling a distaff Joe Don Baker, only Bates prevails by plausibility as an absurdly invented detective defined primarily by a mastectomy she references within her first ten lines. Not at all subserved by its moronic impertinence, schlockily recriminative repartee, costuming and set design evoking all the shoddiest points of noir crime dramas and a sapphic subtext of the hoariest convention, sprinkled with misandrist quips for a demographic prepossessed by Lifetime’s fare, bound by Roos’ typically prosaic dialogue and scored by numbers to the humdrum hilt courtesy of tiresome Randy Edelman, Chechik’s turkey trudges on and on and on and on to a conclusion of brutal fatuity, at every opportunity almost calculatedly shirking suspense. In Hollywood, dreck begets dreck: in a small part played with suitable stilt not too many years after penning and co-producing the unbearably cornball features Regarding Henry and Forever Young, unsightly and nepotistic golden boy J.J. Abrams appears as one in a duo of A/V dorks to foretoken his perpetuation of uninspired trash in this exact idiom. Brilliant for their adapted invention, Clouzot’s best movies are unassailable, recreated exceptionally on rarest occasions only by virtuosi such as Friedkin and Chabrol. Inadvertently, unrepentantly, Chechik certified that genre journeymen are seldom able auteurs, a verity apparently unfathomable to studio executives. 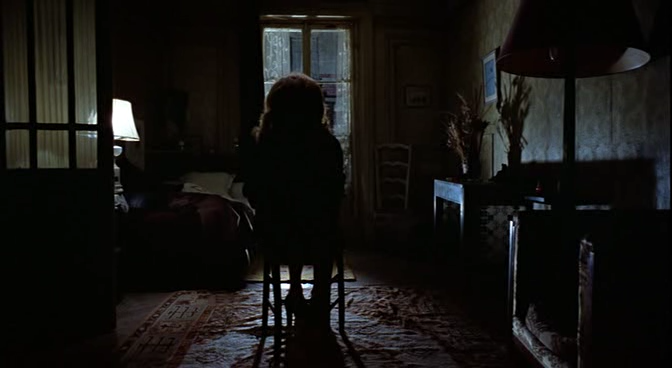 The Tenant (1976)
Directed by Roman Polanski
Written by Roland Topor, Gérard Brach, Roman Polanski
Produced by Andrew Braunsberg, Alain Sarde, Hercules Bellville
Starring Roman Polanski, Isabelle Adjani, Melvyn Douglas, Jo Van Fleet, Shelley Winters, Bernard Fresson, Romain Bouteille, Rufus
Nigh every shot of Polanski’s masterful castigation against ethno-national prejudice and personal paranoia brims with allusive guile and dudgeon, starring Romek as a meek immigrant clerk in oppugnant Paris who procures at some stiff expense a slightly sordid apartment suite of exiguous amenities, whose previous resident mysteriously defenestrated herself. Isolated by and persecuted for his exogenous condition, this chary outsider finds little more camaraderie among his bawdily contumelious colleagues (Fresson, Bouteille, et al.) than with his hostile landlord (Douglas), concierge (Winters) and fellow tenants, who reprehend him for disturbances minor, blameless and seemingly false. His sole cordial connection’s established by romancing a gorgeous, genial friend (Adjani) of the hospitalized anterior lessee, who he visits under friendly pretenses to sate his curiosity…but as his anxieties and rancor swell with the contumely he sustains, the timid immigrant’s adoption of his predecessor’s traits and trappings proves as much a means of relation as the vessel of his nascent madness. Not too many artists have so scathingly anatomized both societal biases and paranoid psychosis in direct correlation as had Romek as one of his continent’s thorniest migrants, and while his third flamboyant address of disquiet in apartmental confines (torn from Panic Movement author Topor’s novel Le locataire chimérique) suffered almost unanimous censure by obtuse critics and an indifferent public, it may be his thematically richest offering, conscientiously cut and composed with an unerringly equivocal eye for intimation and effect. As fine in the lead as his picture’s most surreal flourishes, the auteur’s very nearly upstaged by his fantastic cast, all clownishly dubbed in English to emphasize their characters’ essential shallowness. Almost incalculable in its influence (most famously manifest in certain pictures by Lynch and the Coens), Polanski’s refracted exposure of collective animus and the persecution complex submits in Kafkaesque candor a critical question concerning character: exactly what measure of one’s identity is informed and defined by perceived persecution?
Recommended for a double feature paired with Repulsion, Images, Barton Fink, Lost Highway, Mulholland Drive…