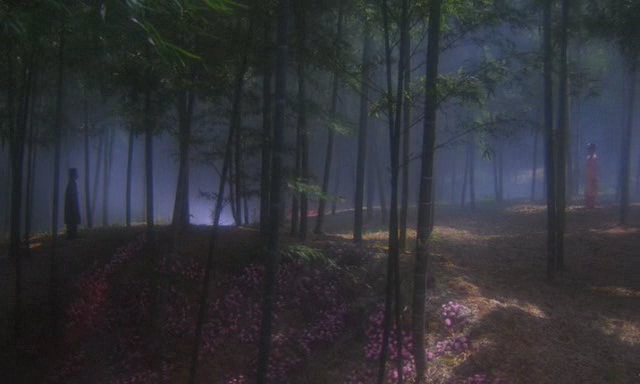 Akira Kurosawa’s Dreams (1990)
Directed by Akira Kurosawa
Written by Akira Kurosawa, Ishiro Honda
Produced by Mike Y. Inoue, Hisao Kurosawa, Seikichi Iizumi, Allan H. Liebert, Steven Spielberg
Starring Akira Terao, Toshihiko Nakano, Chishu Ryu, Mitsunori Isaki, Masayuki Yui, Mieko Harada, Chosuke Ikariya, Martin Scorsese, Mitsuko Baisho, Toshie Negishi, Hisashi Igawa, Yoshitaka Zushi
Not a jot more or less lucid than their sources, this feature comprehends vivid dramatizations of eight dreams conceived during Kurosawa’s slumber: on a rainy day, the director as a tad (Nakano) ventures into a forest against the counsel of his mother (Baisho) to furtively observe a procession of vulpecular spirits celebrating an espousal; during Hinamatsuri not a decade later, he’s (Isaki) briefly intrigued by his sister’s hina-ningyo set before lured by a young girl to an orchard where trees bearing peaches were felled by his family, and encounters the dolls’ imperial spirits personated in hierarchic formation, as aggrieved as he for their loss; a mountaineering quartet meet with a blizzard, during which the most mulish among them (Yui) is visited by a bewitching yuki-onna (Harada); after measuring a reverberant rural tunnel, a discharged army commander is confronted by his deceased platoon in either ignorance or defiance of their quietus; in early middle age, Kurosawa (Terao) admires a selection of Van Gogh’s masterworks in a gallery before traversing several of them in search and pursuit of the madly nettlesome master (Scorsese!), who elaborates on the wonders of natural beauty and strenuity its delineation connotes before his admiring pursuer ranges to revel in the magnified beauty of evocative brushstrokes as loci; as nuclear reactors inadvertently detonate to render Mount Fuji incandescent, AK accompanies two other survivors (Negishi, Igawa) dwelling on the depredation of nuclear horror; a post-apocalyptic wasteland’s the stage for Wind Man’s meeting with a lesser demon (Ikariya) bemoaning their lot amidst dandelions enormously escalated by nuclear fallout and other floral mutations; in an idyllic hamlet replete with watermills where modern conveniences are abjured in favor of natural harmony, a centenarian (Ryu) elucidates his austere lifestyle to Kurosawa and deprecates the pollution and misery attending industrialization. His last extravagant production succeeds as both an oneiric expression of Kurosawa’s apprehensions and admirations, and a cinematic model for adaptation in this mode. Ever poignant for and despite its curiosities and hazy beauty, the burden herein concerns AK’s reverence and fear for nature, a preoccupation articulated more in observation than didacticism. Opulent production values are musically complemented by Chopin’s Raindrop prelude, In a Village from Ippolitov-Ivanov’s first Caucasian Sketches suite and a slyly stirring and effectively applied score by Shinichiro Ikebe surpassing anything he composed for Imamura. Clearly, Kurosawa grasped the significance of the dream as a distorting or refracting window through which reality’s scrutinized; bookending with cavalcades in commencement of a wedding and conclusion at a funeral, the aging Emperor strove in his final decade with an ambition worthy of Fellini to synopsize life through that sleeping veil.