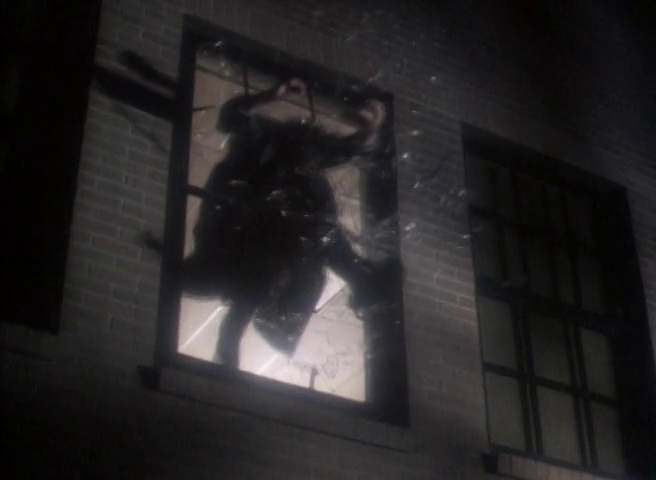 Bankings of dirt tracks aren’t easily navigated by a troubled stock-car racer (Prior) while he sustains lancinate headaches that accompany presumably clairvoyant visions of a serial killer’s murders. His slovenly uncle and mechanic (Cobb), and a news reporter (Bergman) whose bed he shares afford him more credence than a police detective (Vincent) and his superordinate captain (Ford).

Their story’s derivative of a couple classics, but Prior’s, Simeone’s, and Coleman’s comedy inadvertently resides in its dialogue. Lines like, “We’re leaving the country, and I’ll explain on the plane, OK?” are funnier than their cockamamie chaff.

Few oeuvres reflect quantity over quality as that of the extraordinarily fertile Prior, whose clumsy composition persisted through his career. Half of his shots appear to be set by a director possessing a fraction of his experience.

So many B-pics from the mid-’80s through the early ’90s are lensed in the barely blurred mode of DP Andrew Parke.

Tony Malanowski’s acceptable assembly of Prior’s reels is almost better than they deserve.

Prior plods hunkily through yet another of his big brother’s many movies by hitting his marks, but only unveils his inner Corey Feldman during his last 10 minutes onscreen. Bleached, leggy venereal vector Lords gifts his sister with a flirtatious feistiness absent in her future overacting, but she hasn’t the mannish magnetism of sinewy Bergman, who’s an auntly agreeable love interest. That plentitude of personality somewhat compensates for stiff Vincent’s permanent reliance on his screen presence. He’s best cast as a menacing miscreant, so canine Cobb copes erratically with a misfitting role. Ford is top-billed for seniority and celebrity, and brings a cozily gruff gravitas to his penultimate performance that’s pleasing, if misplaced.

His orchestrations forebode with greater resonance than tracks that Greg Turner sounded with a Yamaha DX7.

A decent car chase through Mobile concludes with the spectacular crash of a pickup truck from the top story of a parking garage, the legality of which would be unfeasible in most other American cities.

Most of his cast can’t act, and Prior directs as Korean women drive. Junkers striving in a motor rally during the first act are plainly proceeding at approximately 35 mph, probably because Prior didn’t know how to film them at a competitive velocity. If you enjoy schlock of this strain, you won’t mind. RiffTrax is no stranger to Prior’s features, and may well tackle this; every tenth shot could qualify as one of MST3K’s stingers.

This is recommended only for fans of its whilom A- and B-listers, or armchair riffers acquainted with Prior’s violent filmography.

Instead, watch Eyes of Laura Mars.