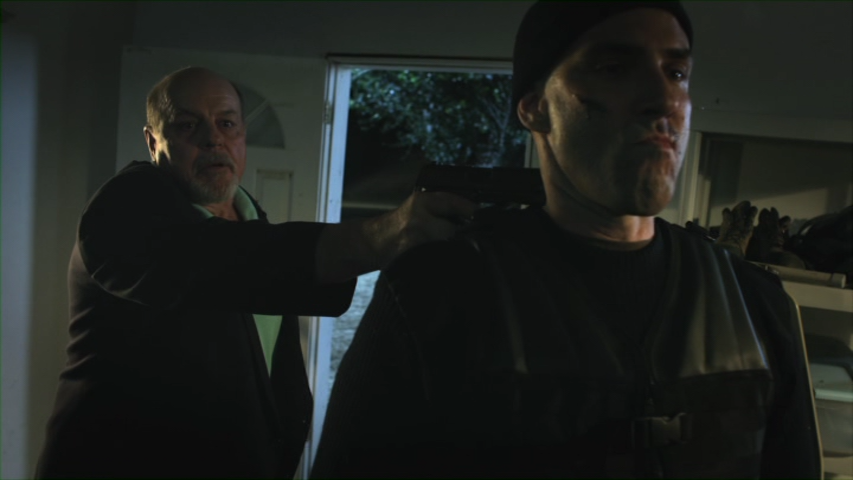 Six dumb collegianers (Duff, Gerard, James, Sossaman, Calderon, Rosada) cavort at an isolated summer house during spring break, and by trespassing on his home aggravate its domineering groundskeeper (Menendez), an insane ex-Marine who deviously dispatches them with a purpose and a plan.

Little occurs in this story until its third act, and its ratio of discussion to action is proximately 10:1, which might be excusable if that predominant class wasn’t brainless banter and iterated confusion. Co-producer Chambers recycles devices established in classic thrillers sans a spark of suspense.

Whether accomplished DP and FX specialist Bruce Logan contributed to this flick for charity or necessity is unknown to this reviewer, but his splendent (days for) nights are almost as artificially unattractive as scenes darkened by drab tinctures, for which he’s responsible as its DI colorist.

Neither am I aware if co-producer E. Dylan Costa, Robert A. Ferretti, or both were ripped on stimulants when they feverishly butchered Garcia’s footage, or if they did so to conceal even more of its shortcomings. Their ASL is 2 seconds.

Overlooking one fluffed line, the lesser Duff sister is a passable leading lady. Menendez treats his villainy with brio, as would reliable old Ironside were he accorded a meatier part. As one of those raunchy, obnoxious stoners who infest fraternities and later middle management, Calderon’s portentously pestilent. Everyone else verbally treads water until dead.

Joe Faraci’s chintzy score is redolent of those heard in features broadcast from Lifetime’s limitless landfill.

Some mild amusement’s to be had when Menendez upbraids and menaces these vexing vacationers. Scenery’s satisfyingly nibbled by Ironside in the role of Duff’s dad, who isn’t evil enough to provide sufficient grist for the grizzled Canadian’s mill.

Even including its superfluous backstory, this half-hour of plot makes a mingy 70+ minutes. Thirty-one minutes after Menendez’s outdoorsman informs James’s pseudo-nerd that he hosts hikes and hunts, the latter discovers this from online advertisements and testimonials. Only Menendez and Ironside don’t play certifiable clots.

This offal insults one’s intelligence as much as studio-grade chum. If you can view it freely, mellow Ironside’s worth watching during his 10 minutes onscreen, shot to satisfy financiers unfamiliar with Duff.

Instead, watch Deliverance or Cabin Fever.