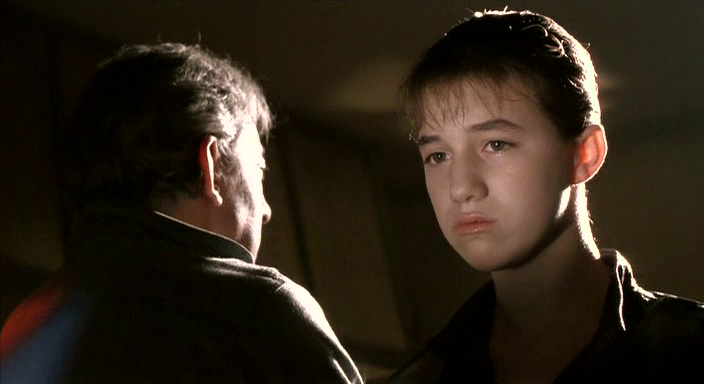 Charlotte for Ever (1986)
Directed and written by Serge Gainsbourg
Produced by Claudie Ossard, Jean-Claude Fleury, Charlotte Fraisse
Starring Serge Gainsbourg, Charlotte Gainsbourg, Roland Bertin, Roland Dubillard, Anne Le Guernec, Sabeline Campo
That late phase of his life and career when Gainsbourg intimated incestuous relations with his adolescent daughter for publicity and profit climaxed with his hokey ode to hebephilia, persisted with a salaciously sloppy smooch when Charlotte won a César Award for her lead performance in An Impudent Girl, then finally fizzled for the failure of this preposterously plotless, mawkish, kinky little drama, notable chiefly for its scant score and cockamamie comedy, mayhap half of which is deliberate. Succeeding his wife’s fiery demise in an automotive accident (from which he escaped with a supposedly scorched, gloved right hand), an alcoholic screenwriter (Gainsbourg) years past his prime mourns her by moping around his home, composing bad poetry, pitching lewdly unsalable scripts to his producer (Dubillard), comforting a heartbroken friend (Bertin), flirting with his sullen, sylphlike scion (Gainsbourg) and her equally beddable, if brainless friend (Campo), and boffing a butterfaced student (Le Guernec) under his tutelage. All else is implied. His admittedly striking composition can’t be faulted for all the truly unique inanities that Gainsbourg realizes therein: Charlotte whips wet, unshampooed hair to and fro while wiggling her rump; father and daughter reenact their respective wife’s and mother’s fictional death with slot cars; hungover Serge fingers his throat for genuine emesis; as Charlotte attacks Le Guernec in a jaundiced wax, her dad tears himself away from his toilet (and a close-up of his erratic urinary stream) to manhandle the ugly, shapely strumpet, then dance with his little girl. They recite and vogue rather than act, for who needs characters when they already are? As sulking Charlotte gazes dazed in what appears a harrowed hebetude punctuated by periodic outbursts, stuporous yet spastic Serge emotes weirdly, rotating his twisting, flicking paws, quoting classic literature in monologies, and muttering ham-handed exposition because he can’t or won’t exert allusion in a non-lyrical context: “I’ll steal something from classics like Benjamin Constant. Herman won’t notice. Poor idiot! He’s an ignoramus.” Most of this transpires as one might imagine those weekends or summers when the divorced pop star enjoyed custody. Just as aforementioned Lemon Incest is derived from the principal theme of Chopin’s third étude in E major, the tune of this picture’s eponymous theme song is cribbed from Khachaturian’s Andantino; in both, Charlotte’s breathily inept vocals remind all listeners that she’s as much her mother’s daughter as an inarguable beneficiary of daddy’s nepotism. Naturally, Gainsbourg’s music is excellent, but meager in repetition of only a few tracks. Leave it to Serge to err in a manner contrary to everyone else! Despite its absurdity, this most decadent chanteur’s laughable lust letter is truly singular, and entertaining for its perverted peculiarities.