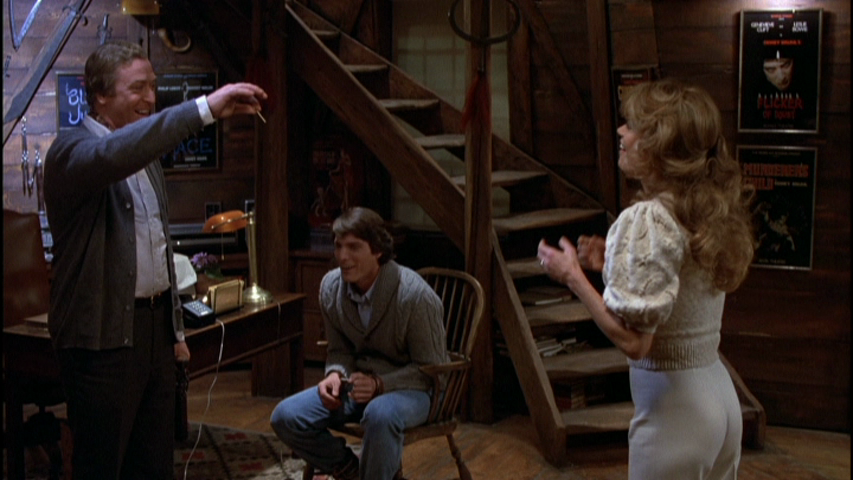 “The most important thing in acting is honesty: if you can fake that, you’ve got it made.”

For four flagrant flops in consecution, their famed but fading playwright (Caine) of thrillers is driven to dejection, desperation and distraction of a kind inspiring the murderous machination to invite a sometime student (Reeve) who’s penned and posted him a first-rate foray in his manner to his home for collaborative colloquy, so to dispatch the gifted greenhorn with an article from his panoply of stage props and antique weaponry, and crib the thriller as his own to revive his career and finances. Attic dialogue, anfractuous artifices and artful auguries of Levin’s hit stage play are preserved and magnified in this penultimate picture of Lumet’s second winning streak, as sable in its hilarity as it’s diegetically flexuous, defying and denying prevision for initial viewers first with a perverse masterstroke at midpoint, then a succession of vicissitudes as both the sinuous plot and that of its culprit’s eponymous work unfold pari passu, complicated by the homicidal author’s squirrelly, cardiopathic wife (Cannon) and a meddlesome, clairvoyant celebrity (Worth) of Netherlandish extraction. Caine was cast choicely in the seething, sulky, scheming, creepy lead opposite Reeve, whose typecast stature as cinema’s charming, caped darling made selection of a wickedly rigorous role as impressive for his professional daring as his patently protean proficiency. “To show you any more would be a crime,” proclaims this movie’s trailer in sincerity; that first of several twists may not shock with the potency it had over three decades ago, but the cinematic dash with which Lumet and continually contemporaneous collaborator Allen adapted Levin’s ingenious source elevates it in transition to the filmic medium. It’s shot, played and cut with such irresistible, hysterical, cutthroat, playful panache, you almost can’t envision its proscenium!
Recommended for a double feature paired with A Shock to the System.