The Beaver (2011)
Directed by Jodie Foster
Written by Kyle Killen
Produced by Steve Golin, Keith Redmon, Ann Ruark, Dianne Dreyer, Mohamed Khalaf Al-Mazrouei, Paul Green, Jonathan King, Jeff Skoll
Starring Mel Gibson, Jodie Foster, Anton Yelchin, Jennifer Lawrence, Cherry Jones, Riley Thomas Stewart, Zachary Booth
It never quite transcends its sappiness or absurdity, but Foster’s third directorial undertaking fixates with psychodramatic peculiarity that’s anchored by its discerning leads. Crippling despondency has immobilized a businessman (Gibson), isolated his long-suffering wife (Foster) and sons (Yelchin, Stewart), and nearly destroyed the toy company that he inherited. His attempted suicide fails, after which he finds solace and success by communicating with everyone through a manual puppet fashioned as a plush beaver — an artifice that restores two of his three familial relations, revivifies his managerial confidence and accomplishment, and admits an afflatus that he elicits into a bestselling toy. When his depressive symptoms recrudesce, his personality’s new aspect is viciously vitiated, and threatens to fordo its host’s headway. Vice and addiction are etched deeply into Mad Mel’s lineaments; his trials clearly inform the sensitively shaded intensity with which his tormented executive is personated. Foster’s knack for effusion of desperate empathy finds her in good footing among her fellow orbital foils. A subplot whereby Yelchin’s bright and fraudulent misopaterist is commissioned by a cheerleader (Lawrence) to ghostwrite her valedictory renders both as handily as it supplements a running time of 90 minutes, but it’s so cornily, collaterally discrete that its thematic congruity with the primary plot is at best tenuous. As for her previous features, Foster’s solidly workmanlike direction ballasts these and balances an often uneasy mixture of comedy and drama that isn’t helped by Marcelo Zarvos’s twee score. Killen’s delineations of clinical depression and the vice president (Jones) of Gibson’s firm as an adept, unassuming administrator (rather than the overbearing virago who flourishes only in Hollywood’s fiction) are refreshingly honest. Most contemporary American dramas are sunken by melodramatic contrivances that erupt between characters demarcated only by variances of narcissistic inauthenticity, but the sincerity of this screenwriter and directress shines through their mundane missteps. 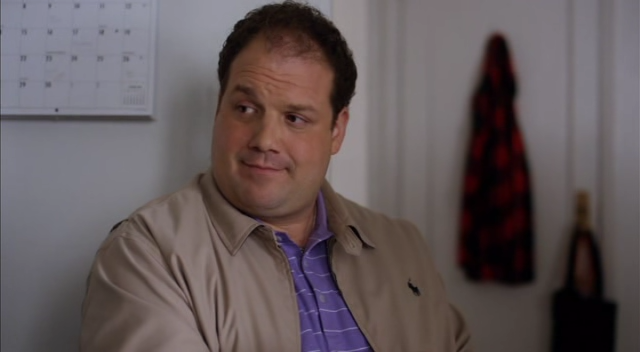 Dark Horse (2011)
Directed and written by Todd Solondz
Produced by Derrick Tseng, Ted Hope, Juan Basanta, Craig Shilowich, Nick Quested
Starring Jordan Gelber, Selma Blair, Mia Farrow, Christopher Walken, Donna Murphy, Justin Bartha, Zachary Booth, Aasif Mandvi
His every pronounced peculiarity disadvantages a huffy, porcine, purblind, puerile, thinning thirtysomething toy collector (Gelber) whose employment under his weary father (Walken) and camaraderie with his doting mother (Farrow) are strained by a boundless immaturity overt as total social ineptitude and an insufferable species of insolence. Smitten with an introverted depressive (Blair) with whom he shares more compassion than congeniality, this liege yet ludicrous man-child mollified by a lifetime of parental pampering rages at every adversity, blaming all save himself for his squandered opportunities. Even in dreams that confront him with distressing insights affirming his shortcomings and self-doubt, apprehensions and affections, he’s too rigidly obtuse to accept his lot, or any substantial responsibility. If that line between pitch-black comedy and solemn drama that Solondz toed in previous pictures is even present here, he ignores it entirely, and nowhere are his mingled hilarity and pathos so affecting as in prolonged static shots and zooms. As an exemplar of his stunted generation, Gelber’s hilariously, almost brilliantly embarrassing in the lead, his delivery of both blustering ebullience and the deathly pessimism lurking beneath as gracelessly credible as amusing. Aging, bewigged Walken and Farrow are weirdly Ashkenized with dark contacts, and almost as resounding in their staid gloom as Blair, now a polished veteran of miserable characterization. Abounding with obnoxiously shopworn and superficial pop songs mirroring its subject’s temperament, this monition from Solondz to Gen-X and millennial audiences regarding the unique strains of inanity and dysfunction proceeding from prosperity and indiscipline may prove more relevant — and its protagonist less atypical — with every passing decade.